- September 12, 2018
The final installment of The Mo and Dale series by Sheila Turnage is here. 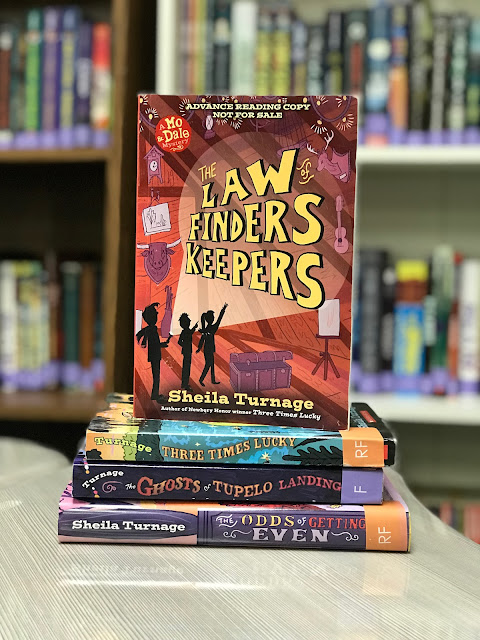 In case you haven't had a chance to read any of these wonderful books in the series, here is the Goodreads synopsis for The Law of Finders Keepers:

Pirates, family, and the truth about Mo's Upstream Mother collide in the conclusion to the Newbery Honor and New York Times bestselling Three Times Lucky

When the Colonel and Miss Lana share the clues about Mo's watery origins that they've been saving, it seems the time is finally right for the Desperado Detectives (aka Mo, Dale, and Harm) to tackle the mystery of Mo's Upstream Mother. It's the scariest case Mo's had by far. But before they can get started, Mayor Little's mean mother hires them to hunt in her attic for clues to Blackbeard's treasure, which could be buried right in Tupelo Landing. Turns out, the Desperados aren't the only ones looking. A professional treasure hunter named Gabe has come to town with Harm's estranged mother--and soon the race is on, even though the treasure's rumored to be cursed. As centuries- and decades-old secrets are dragged into the light, there isn't a single person in Tupelo Landing quite prepared for all that they uncover. Especially Mo.

The fourth and last book in the Mo & Dale Mystery series and the long-awaited conclusion to Three Times Lucky, The Law of Finders Keepers is a heartbreaking, heartwarming, honest, and hilarious adventure that you can read right after you finish Three Times Lucky.

I am a 5th grade teacher and each year as I get to know to my students, I could not even begin to give you an accurate number of how many of them tell me they want to read adventure stories with a mystery to solve. This is seriously the PERFECT series for that. Mo & Dale are so much fun to follow around and each story is like you are meeting back up with old friends.

If you have students that are reading this series, I would definitely use the storyline for them to create their own imaginative storyline. They can get a lot of inspiration from having two characters go through and be detectives. It would be a great way to have a writing activity.

I had several students read the first 3 last year and was able to get them to create some questions for Sheila for this upcoming release. Check out the author interview below:

How hard was it to write books in a series?
It was hard in some ways, but also lots of fun.
Writing a series is tricky, because the characters’ stories become more and more entwined with each book – so I have less wiggle room with the plots.  But on the upside, I have time to be nosy about all my characters, and I have more room to develop them.
In the first book, THREE TIMES LUCKY, I got to build a world for Mo and Dale – exciting!  With the next books I built on that world.  As new mysteries found their way to Tupelo Landing, I developed new characters in town, like Harm, plus characters from the first book.  Like Sal, Mr. Red, and Grandmother Miss Lacy.
Of course a series includes more details than a standalone – which can be challenging, too.  So, if Mo looks out Dale’s window and sees a barn in THREE TIMES LUCKY, when she looks out the same window in THE LAW OF FINDERS KEEPERS, that barn has to be there!  So many details!
Do you prefer stand alone or series writing?
Great question.  The answer is, I love both.
I loved writing each of these books as standalones.  And I loved tying them together as a series because I get to go deeper into the characters, and watch their stories unfold.
Of course this is a series of standalones with a strong heart mystery tying all of them together – the mystery of Mo’s long-lost Upstream Mother.   THE LAW OF FINDERS KEEPERS completes the series, because Mo and the Desperado Detectives take up the search for Mo’s mother again, using their borderline professional detective skills.
Will they find her?  Great question!  But I’m not answering that one.

How did you come up with the entire story line for Mo & Dale mysteries?
Wow!  Super question!   Honestly, I think inspiration is everywhere, we just have to be open to it.
Mo’s voice, courage and spunk inspired me, and kept me going as I followed her story.
Life and the people around me inspire me, too.
For instance, in North Carolina, where I live, we have terrifying hurricanes.  During one hurricane not so long ago, people climbed onto their roofs in the middle of the night as the rivers rose, hoping to be rescued.
Was a baby born on the roof, and did she float away, like Mo?  Not that I know of, thank heavens.  But, you can see how that worked.
So I’d say my fiction is a seed from my life wrapped in a lot of imagination.
In THE LAW OF FINDERS KEEPERS, one seed is Blackbeard’s treasure.  Because in real life, Blackbeard lived just down the road from me and I’ve always wanted to find his treasure!  And, of course, the other seed is that hurricane story, and Mo’s search for her mother.
Writing fiction is really the art of taking bits of the life around you, and letting them grow into something new.  I just try to let the storylines unfold naturally.  It seems to work for me.
If you keep your heart and your eyes open, you’ll see great story ideas all around you, too.

What inspired you to become a writer?
I decided to become a writer in first grade.
My teacher wrote the vocabulary words on the board, and said, “Write a story!”
It was my first story ever.  We used the fat pencils and that weird tan paper with blue dotted lines.  When my teacher stopped by my desk to read my story, she told me I was an excellent writer, and asked me to read my story to third-graders.
Third graders!  Wow!  I decided to be a writer that very day.
I was lucky at home, too, because my parents read to us.  My mother took me to the library as soon as I could read, and got me a library card.  And I was off and running.

What is your writing process like? Do you prefer writing by hand or on a computer?
I like to write by hand first, especially if it’s an important scene.  I write in cursive, and I write big and wild and fast.
Once I “hear” a character’s voice in my imagination, I follow the character’s lead.  With chunks of story scrawled in my composition books, I head for the computer and type the story in, rewriting as I go.
Finally, I print out what I’ve written and start editing.  I write my changes on the manuscript by hand, and type my edits into the computer.  And when it hangs together a bit, I send it to my editor, Kathy Dawson at Kathy Dawson Books.
Fortunately, Kathy’s a great editor and I love to rewrite.  We go back and forth, discussing what works and what doesn’t, until the book is good enough for our readers to read.
So, that’s my process.  I think each writer has his or her own.  The trick is to find what works for you.

What advice would you give young kids working on writing?
Never give up writing what you love to write.  And find a group of writers you can share your work with.  For instance, I’ve been going to the same creative writing class for maybe 30 years, and that works for me.
Have fun with your writing and don’t worry about getting published.  You’ll know when it’s time to put your work out there.  And when you do, I will be your biggest fan.

Do you have any recommendations for after other kids finish this series as to what they should read next?
I’m writing a new middle grade novel, with an entirely new set of characters.  It takes place in 1942, in North Carolina.  I hope you’ll want to read it when it’s finished!
Meanwhile, I’d say ask your librarians or media specialists, or the people in your favorite bookstore.  And think about why you like the Mo & Dale Mysteries, and let them know.  That way they can help you find books with southern voices, exciting mysteries, funny narrators…
When it comes to books, they know their stuff!
Thanks so much for these wonderful questions.  Happy reading to you! 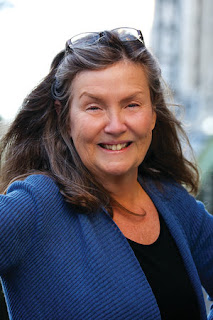 Sheila Turnage is from eastern North Carolina, just like Miss Moses LoBeau, the protagonist from the Mo & Dale mystery series that began with Three Times Lucky. Three Times Lucky is a Newbery Honor Book, a New York Times bestseller, an E. B. White Read-Aloud Honor Book, and an Edgar Award finalist. It has been nominated for nineteen state awards, including the Texas Bluebonnet Master List, and has been licensed in five countries. Her follow-up book, The Ghosts of Tupelo Landing, also a New York Times bestseller, received five starred reviews and was a SIBA Winter 2014 Okra Pick and a Junior Library Guild selection. Sheila is also the author of two more books in the Mo & Dale Mystery series The Odds of Getting Even and The Law of Finders Keepers, and the nonfiction adult books Haunted Inns of the Southeast and Compass American Guides: North Carolina, as well as one picture book, Trout the Magnificent, illustrated by Janet Stevens.
*https://www.penguinrandomhouse.com/authors/31563/sheila-turnage