Showing posts from September, 2017
Show all

I turned over this blog tour to 5 of my fifth grade boys who read and will be reviewing the book from their point of view. We live in a town right outside San Antonio, so I felt that this would be an awesome opportunity for them to be able to read and make those connections to where the setting is in Lone Stars.  Boys easy summary: This story is about Coach Coop and Clay and their football season. It discusses the tragic times that they are going through in their season and the things that truly do happen between teammates and coaches.  Q: How does this book relate to your life as a young football player in Texas?  Boys: Coming back from losing and winning games. Even as fifth graders we are taught to never give up. So, when in the story they never lose, but are down a lot, they portray to never give up, which is how we are in our own games as well. Q: What are you thoughts on concussions in football? Boys: Overall, we know that they are really bad and they damage you bra
2 comments
Read more 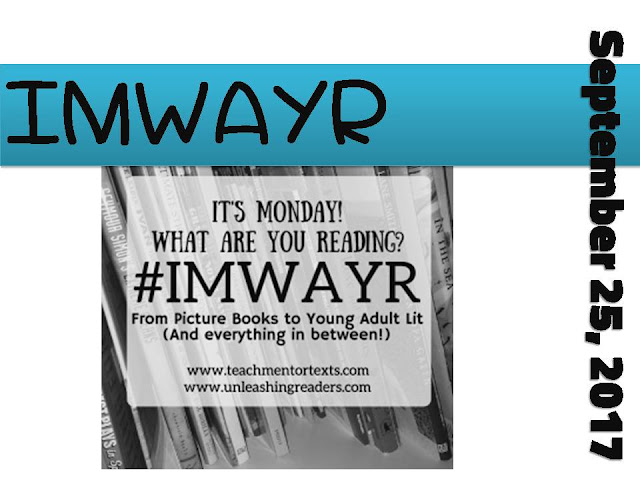 During class this week, my students and I will revisit the reading goals we set for the first quarter. One of my goals was to read a graphic novel.  This is a format I struggle with because I'm distracted by the pictures and tend to skim over the words. However, when Michele Knott introduced me to Rollergirl, by Victoria Jamieson at NErDCampMI, I knew I'd read every graphic novel she wrote...and I'm almost done her newest. Since I have four students clamoring over it, I know I need to finish it tonight!  Be sure to check out Colby Sharp's VLOG about The Creativity Project-Amber managed to snag an elusive ARC! If you're looking for an action-packed middle-grade read, check out The Jumbies, by Tracey Baptiste, our most recent author spotlighted!
Post a Comment
Read more

Book Review - The Care and Feeding of a Pet Black Hole 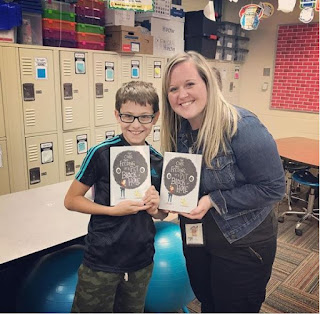 Hi, Readers! Today you get a review from one of the best reviewers out there – a fourth-grade student! Ellis and I read The Care and Feeding of a Pet Black Hole by Michelle Cuevas last week and we wrote down some of our thoughts. Enjoy! What is this story about?  Ellis’ answer: It is about a girl named Stella Rodriguez and a black hole follows her home. She finds out that it can get rid of bad memories. And changes her mind of how bad she thought they were and tries to get them back. Will she get them? Who knows... read the book to find out! Mrs. Kuehler’s answer: The Care and Feeding of a Pet Black Hole is about a young girl named Stella. Stella is grieving the loss of her father and the story is told in the second person as if Stella is talking to her father. Stella and her father have a close connection and often bonded over science. Especially anything that had to do with space. One day, Stella unexpectedly comes home with something unique - a stray pet black h
2 comments
Read more

Rise of the Jumbies - Author Spotlight 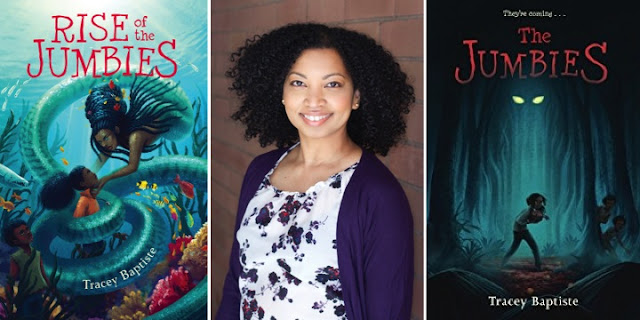 Welcome to Teachers Who Read - we are students of Mrs. Thomas's class who have a love  of reading and want others to know about our favorite authors!  Tell us about your most recent book. Rise of the Jumbies is the sequel to The Jumbies. This time, when children begin to go missing on Corinne's Caribbean island she decides to take on a water jumbie--Mama D'Leau--to help her find them. But Mama D'Leau's help comes at a price, and Corinne finds herself on an adventure very far from home. In this story, readers are introduced to more jumbies, as well as some familiar mythical creatures: mermaids! Corinne works with the mermaids and her friends to complete Mama D'Leau's task. It turns out to be much more difficult than any of them realize.    When did you decide you wanted to be an author?  Probably since I was three and my mother handed me a huge illustrated copy of Grimm's Fairy Tales. It was so gorgeous, and I liked the stories so muc
1 comment
Read more 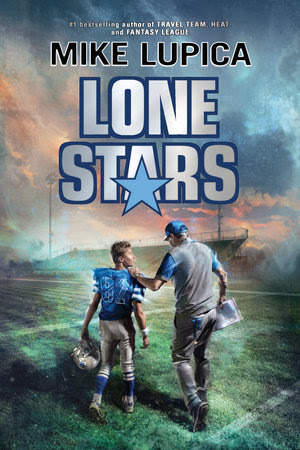 Synopsis from Goodreads:  Clay is a quarterback's dream. When he zips across the field, arms outstretched, waiting for the ball to sail into his hands, there's no denying him the catch. Like most Texans, Clay is never more at home than when playing football. And his coach, a former star player for the Dallas Cowboys, is just like a second father.  But as the football season kicks off, Clay begins to notice some odd behavior from his coach--lapses in his memory and strange mood swings. The conclusion is painful, but obvious: Coach Cooper is showing side effects of the many concussions he sustained during his playing days. As Clay's season wears on, it becomes clear that the real victory will be to help his coach walk onto that famous star logo in the middle of Cowboys Field one last time--during a Thanksgiving day ceremony honoring him and his former Super Bowl-winning teammates. In  Lone Stars , #1  New York Times  bestseller Mike Lupica demonstrates once again that th
6 comments
Read more

We're back with IMWAYR!  During the school year, I'm guilty of binge reading. My weeknights are filled with chauffeuring kids from one place to the next, with little time to read in between- though I'm always carrying a book just in case!  Does anyone else find themselves playing catch-up on Sundays? Over the weekend, I managed to finish two books-Avalanche, a Survivor Series installment, and In Some Other Life, a parallel universe novel by Jessica Brody. I loved them both! AMBER HALEY CASSIE
Post a Comment
Read more 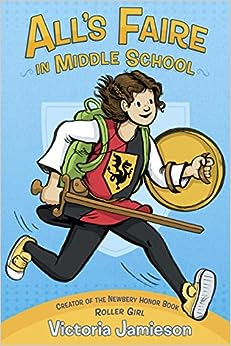 Good morrow*, my friends! Victoria Jamieson hath done it again! I know so many adults and students that LOVE Roller Girl and I know they will be so excited to pick up this new graphic novel from the same author. Recently released and in paperback, this is a very accessible book for upper middle grades this fall. Students in middle school will appreciate and relate to Imogen’s struggles. To her friends and family, Imogen is called Impy and not everyone at her new school knows that her family works at the local Renaissance Faire. Impy herself is training to be a squire, which is like a knight and is something she is very proud of. However, she quickly finds out that things she overlooked in the past, such as her family’s quirky ways, their small apartment they call home and her thrift store clothes are not considered cool by her new middle school friends. Impy desperately wants to fit in and will do almost anything. Even something she knows is wrong. This book is impossible to
2 comments
Read more 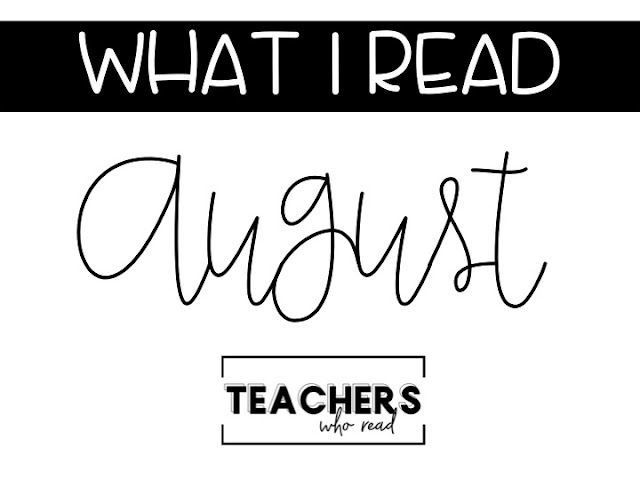 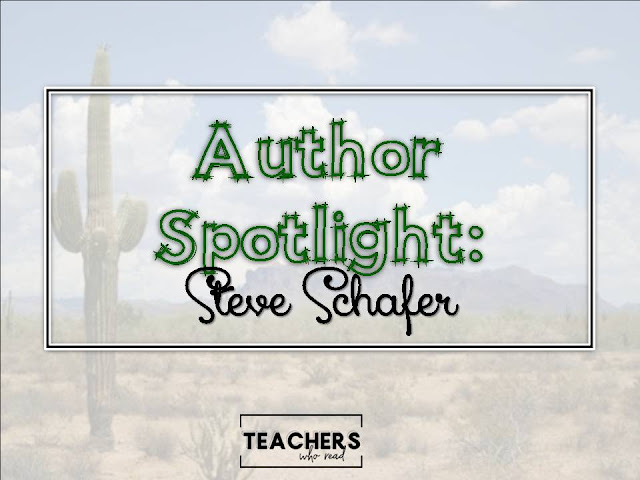 The Border From gun violence to sexual assault. To mental illness and racism. An increasing number of YA authors are tackling tough topics. And while there are YA and MG books that have changed my thinking, or challenged my perspective- Speak. Challenger Deep. All American Boys. The Hate U Give. Dear Martin- there are few that have incited action. Steve Schafer's The Border takes you straight into the heart of La Frontera, and Mexico's narco war. When four teenage friends-Pato, Arbo, Gladys, and Marcus-barely escape with their lives after their family and friends are brutally murdered, they begin an impossible trek across the Mexico's hottest desert. Navigating wound-inflicting  cacti, relentless heat, and the watchful eyes of the Border Patrol, Pato, and his friends give illegal immigration a face. This is one of those books that need to be in our world. This book does for illegal immigration what The Hate U Give did for the Black Lives Matter movement and what Al
1 comment
Read more
More posts