Amari and the Night Brothers Review

Thank you B.B Alston for the opportunity to preview your upcoming novel Amari and the Night Brothers

Artemis Fowl meets Men in Black in this exhilarating debut middle grade fantasy, the first in a trilogy filled with #blackgirlmagic. Perfect for fans of Tristan Strong Punches a Hole in the Sky, the Percy Jackson series, and Nevermoor.

Amari Peters has never stopped believing her missing brother, Quinton, is alive. Not even when the police told her otherwise, or when she got in trouble for standing up to bullies who said he was gone for good.

So when she finds a ticking briefcase in his closet, containing a nomination for a summer tryout at the Bureau of Supernatural Affairs, she’s certain the secretive organization holds the key to locating Quinton—if only she can wrap her head around the idea of magicians, fairies, aliens, and other supernatural creatures all being real.

Now she must compete for a spot against kids who’ve known about magic their whole lives. No matter how hard she tries, Amari can’t seem to escape their intense doubt and scrutiny—especially once her supernaturally enhanced talent is deemed “illegal.” With an evil magician threatening the supernatural world, and her own classmates thinking she’s an enemy, Amari has never felt more alone. But if she doesn’t stick it out and pass the tryouts, she may never find out what happened to Quinton. 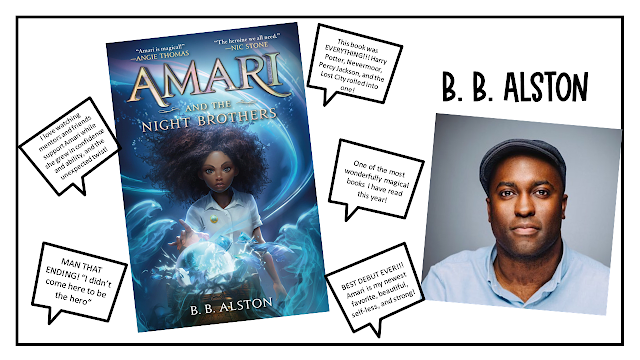 (Snips of reviews from Goodreads)

From the beginning, the cover grabbed my attention immediately. The radiating of black girl magic coming though is truly amazing. I could not wait to get my hands on a copy of this book.

Amari is a very strong will character and she is determined to find her brother, Quinton, who has gone missing. She believes he is still alive and she will not rest until she finds out what happened to him and why he is missing. That's where the magic comes in when Amari finds out that her brother has left her a secret message that could only be delivered if something happened to him. Quinton ends up recommending Amari as a recruit for the top secret magical agency he works for called the Bureau of Supernatural Affairs. When Amari is accepted as a trainee, she struggles as an outsiders. She doesn't come form privilege or a long line of previous agents. I had all the feels for Amari as time and time again she faced prejudice from adults and peers. Luckily others doubts didn't stop her from doing her best to live up to her brother name and fame as she learns all about the history of the bureau.

Amari is now one of my favorite characters. She doesn't let her circumstances get in the way of her success and that will definitely be inspirational to all readers.  Her personality shines especially when she makes friends with her roommate who also at times is excluded by peers. Overall Amari is strong-willed, courageous, and a good person that everyone will want to be like. Amari is a character I would want to meet in person. Outside of all the turmoil that Amari experiences throughout the book, she is able to create the most amazing friendships. As you read...one of them may be too good to be true! This shows she does have peers and even adults (agents at the bureau) that are looking out for her best interest.

I really loved reading this book and I was so sad for it to come to an end. I will be anxiously waiting the arrival of book 2 (next year probably!) As soon as you open this book, it's magic grabs your attention and keeps you wanting more with every turn of the page. You will not be disappointed after reading B.B Alston's debut novel Amari and the Night Brothers!

What inspired you to write a young, female, black protagonist?

As soon as I decided I wanted to write about a kid from my own background (Black & from modest means), Amari popped into my head pretty much fully formed. I instantly knew what she looked like, what she sounded like, and how she sees the world. It was like she had been there all along, just waiting for me to have the courage to put her front and center. She’s got a lot of me in her, but also a lot of the girls I grew up with too.

Why did you decide to tell Amari’s story as a supernatural fantasy?

Fantasy books are easily my favorite reads. Those are the stories that have always captured my imagination and sparked my sense of wonder. But when I was growing up, there just weren’t any fantasy books about Black kids. And so, I began to believe that I didn’t belong in my own imagination. By putting Amari into a story like this, it’s my hope that kids get to see that anyone can be the hero of their own stories—even magical ones.

Did you know this was going to be a series when you started writing it?

I did! I envisioned Amari’s journey as a big, magical tale playing out over multiple books but it was just as important to me that the first book told a complete story with a satisfying ending. The fun thing about the sequels is that you get to see Amari continue to grow as a character while also getting the opportunity to further explore all the strange and fantastical ways the known world and the supernatural world interact.

You introduce a lot of wonderful creatures and magical elements in your book – what was your favorite part about the world-building process?

The supernatural world in Amari and the Night Brothers is one in which all supernatural creatures exist. And while that premise is pretty exciting to write in itself, what made it really fun was to put my own spin on these supernatural creatures that people are already familiar with. So for instance, the Sasquatch isn’t just a furry monster that roams the forest, in Amari and the Night Brothers, he’s actually a woodland real estate agent to the stars with an impeccable taste in fine clothing.

AMARI addresses important themes of racism, classism, and discrimination – flipping the script on the “chosen one” plots we normally see as she is ostracized in both the real and magical realms. How did you come up with the parallel set up?

The idea of otherness—how we treat people we deem to be different than us—is a major theme in the story. And just being a minority, especially a poor minority, means you’re automatically an “other” in so many settings and situations. Add to that the common trope of the “chosen one” being an outsider, and it was an easy parallel to make. The biggest message I hope people take away from the book is to be kind to one another and to be kind to yourself. Amari learning to both believe in and accept herself is the major emotional arc of the story.

You were planning to pursue medical school when on a whim you pitched your book on Twitter through #DVPit and AMARI took off from there. What advice do you have to fellow fledgling authors out there who doubt the possibility of writing as a career?

My biggest advice would be to never give up. That can be easier said than done, especially when those rejections start piling up, but you’ve got to remember that it only takes one yes for your dream of being a published author to come true. Even if you get to a point where it’s no longer possible to make writing your primary focus, carve out as much time for it as you can. Getting published isn’t a race and you’re never too old. Just keep writing.

The book immediately sold film rights with Universal Pictures, Don Cheadle and Marsai Martin on board. Did you envision AMARI getting the silver screen treatment when you were writing it?

Amari and the Night Brothers becoming a movie was always one of those things I dreamt about, but never actually thought would come true. Some dreams just feel too big! And this was one of them. I’m eternally grateful for the Hollywood interest the book has generated and I’m excited to get a behind-the-scenes look at how a movie gets made.

Since this is a trilogy, we know Books 2 and 3 are coming but do you already have other stories in your head that you hope to pursue?

I’ve got so many stories I want to tell! Definitely more middle grade fantasy, but I’d love to do some YA too. I’ve become a big fan of the YA thriller genre recently, with all the twists and page-turning suspense. That’s got to be incredibly fun to write.

B. B. Alston started writing in middle school, entertaining his classmates with horror stories starring the whole class where not everyone survived! After several years of trying to break into publishing, he had just been accepted into a biomedical graduate program when a chance entry into a twitter pitch contest led to his signing with TBA, 20+ book deals worldwide, and even a film deal. When not writing, he can be found eating too many sweets and exploring country roads to see where they lead.

B. B. was inspired to write AMARI AND THE NIGHT BROTHERS because he couldn’t find any fantasy stories featuring Black kids when he was growing up. He hopes to show kids that though you might look different, or feel different, whatever the reason, your uniqueness needn’t only be a source of fear and insecurity. There is great strength and joy to be found in simply accepting yourself for who you are. Because once you do so, you’ll be unstoppable.

This books is currently available for preorder and will be published on January 19, 2021!