Showing posts from April, 2021
Show all

The Adventure is Now - Jess Redman

Click to purchase!  *Afflink  A fun-filled, action-packed middle grade novel about a boy who learns about protecting the environment, finding real friends, and living in the now while spending the summer on a remote island. Sometimes it's hard to be Milton P. Greene. He says all the wrong things, his family is falling apart, and everyone at school avoids him because of the very embarrassing Bird Brain Incident. But when Milton plays his video game  Isle of Wild , he becomes someone else―Sea Hawk, the brave and brilliant naturalist explorer who conquers danger at every turn. Then Milton’s parents ship him off to the remote Lone Island for the summer, where his uncle Evan is an environmentalist researcher. The island is chock-full of spectaculous species, and Milton realizes this is his chance to become the brave and brilliant naturalist he’s always wanted to be―and even meet some fellow explorers! But as it turns out, the future of the Lone Island is in some pretty serious peril, an
Post a Comment
Read more

First, let me start by saying that no one ever achieved anything alone and my blog launch simply would not be possible without the support that I’ve received from Cassie Thomas, the creator of Teachers Who Read. Since she stepped foot on our campus, my lessons, philosophy, and the reading community I share with my students has been enriched. Keep reading her stuff about books. It will be a game changer in your classroom.  I fell in love with reading when I was nine years old after a long and winding journey of always feeling like the “slow reader.” I didn’t read my first chapter book until 4th grade, well after most of my peers. In fact, If I hadn’t read Beauty by Bill Wallace cover to cover on the afternoons on my bus rides home, I would have had a completely different path in life. I remember it like it was yesterday: being so captivated and moved by the words that nothing else around me mattered except that horse and that story. At the end, I cried. It was the epiphany of my lifet
Post a Comment
Read more 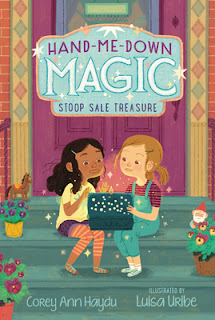 MUST BUY: Early Chapter Book Series!  Meet the best friends at 86 ½ Twenty-Third Avenue. DEL  loves LOTS of things! The Curious Cousins Secondhand Shoppe. Ginormous family dinners. And of course, her best-friend-cousin, Alma. ALMA  loves her abuelita’s tasty empanadas. Her old home by the lake. And soon, she’ll love living in the same place as her best-friend-cousin, Del.      Yet despite having Del by her side, Alma isn’t quite sure she fits in with their family at 86 ½ Twenty-Third Avenue. It’s a new life and it’s all so  different . When Del finds a special item at a neighbor’s stoop sale, she gets so excited by the magic luck it brings—but doesn’t see that it’s driving the two best friends apart. Will family, friendship, and maybe a little everyday magic be enough to make things right again?  Brimming with adorable illustrations and short, easy-to-read chapters, this is sure to be an instant favorite for fans of  Ivy and Bean  and  Dory Fantasmagory ! Beginning chapter book about
Post a Comment
Read more
More posts