The Most Perfect Thing in the Universe - Review 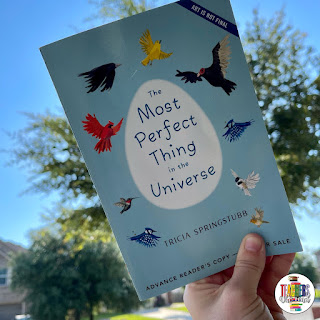 Watch a video of Tricia talking about her new release here! Click on the book cover to watch the video.

For fans of Shouting at the Rain by Lynda Mullaly and The Adventures of a Girl Called Bicycle by Christina Uss, a novel about one unadventurous girl who discovers she is anything but.Eleven-year-old Loah Londonderry is definitely a homebody. While her mother, a noted ornithologist, works to save the endangered birds of the shrinking Arctic tundra, Loah anxiously counts the days till her return home. But then, to Loah's surprise and dismay, Dr. Londonderry decides to set off on a perilous solo quest to find the Loah bird, long believed extinct. Does her mother care more deeply about Loah the bird than Loah her daughter?Things get worse yet when Loah's elderly caretakers fall ill and she finds herself all alone except for her friend Ellis. Ellis has big problems of her own, but she believes in Loah. She's certain Loah has strengths that are hidden yet wonderful, like the golden feather tucked away on her namesake bird's wing. When Dr. Londonderry's expedition goes terribly wrong, Loah needs to discover for herself whether she has the courage and heart to find help for her mother, lost at the top of the world. Beautifully written, The Most Perfect Thing in the Universe is about expeditions big and small, about creatures who defy gravity and those of us who are bound by it. A Junior Library Guild Gold Standard Selection

A very engaging middle grade novel that is well put together and not complicated in the slightest. The book is very well written given the primary topic of the book (bird watching). The main character is constantly getting bullied; chubby, lazy eye, non-athletic. Her mother bought a house that needs so much work; yet, not concerned about the house. Her mother leaves on a job and leaves her with an older couple. The couple works really hard to get Loah outside more and takes really good care of her. Loah gets freaked out one day at her house as Loah runs into a young boy and girl in a fork in the road - the two kids are very self sufficient (essentially raising themselves). After a while, her mom calls Loah to let her know that she is not returning because she swears that she has found this super rare bird. Loah is disappointed, but never feels as though her mother doesn't lover her, just learning that her mother loves nature the exact same. Loah starts to get a spiral of bad news (when it rains it pours) - including potentially losing her home. Loah's caretakers are now both in the hospital. Loah runs into the kids again, inviting the young girl who was "running away" to stay with her. This girl from the woods gives Loah courage and bravery that she never once portrayed having. Loah gets a phone call from her mom and Loah realizes something is very, very wrong. Loah finding a way to her moms university seeks out her boss to find a way to get her mother back. Again, she returns to bad news with child protective services at her front door on top of her house being condemned, BUT mom will be returning and was injured.
You don't have to leave home to find adventure and discoveries.
Themes: climate change, self acceptance, bullying, courage, bravery, friendship, and true family.
MG reads New Releases Review/Recommendations Teachers