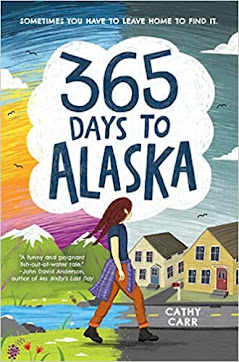 A thoughtful middle-grade debut about a girl from off-the-grid Alaska adjusting to suburban life Eleven-year-old Rigel Harman loves her life in off-the-grid Alaska. She hunts rabbits, takes correspondence classes through the mail, and plays dominoes with her family in their two-room cabin. She doesn’t mind not having electricity or running water—instead, she’s got tall trees, fresh streams, and endless sky.But then her parents divorce, and Rigel and her sisters have to move with their mom to the Connecticut suburbs to live with a grandmother they’ve never met. Rigel hates it in Connecticut. It’s noisy, and crowded, and there’s no real nature. Her only hope is a secret pact that she made with her father: If she can stick it out in Connecticut for one year, he’ll bring her back home.At first, surviving the year feels impossible. Middle school is nothing like the wilderness, and she doesn’t connect with anyone . . . until she befriends a crow living behind her school. And if this wild creature has made a life for itself in the suburbs, then, just maybe, Rigel can too.365 Days to Alaska is a wise and funny debut novel about finding beauty, hope, and connection in the world no matter where you are—even Connecticut.

Amazing book. It has wonderful and startlingly realistic characters, vivid depictions of both Alaska and Connecticut, perfect pacing, and one of my favorite main characters I've ever encountered in middle grade or any genre—Rigel Harman. Transplanted unwillingly from Alaska to Connecticut, Rigel is a complex, sensitive, and deeply good human being whose journey to adapting to her new surroundings is totally believable, fascinating, and moving. I really appreciated that Carr pulled no punches in describing some of the downsides of modern suburban/urban life (things like pollution, wildlife destruction, wastefulness) from Rigel's point of view while also showing her journey towards adapting to it while retaining her own identity and sense of self. All of the minor characters are also extremely well done and believable, especially the father. As a former homeschooler, I appreciate that she depicted homeschooling realistically and respectfully, and didn't make it the focus of Rigel's challenges adapting to her new school in Connecticut.
I just love everything about this book. I hope it gets the wider recognition and awards it deserves, and I can't wait for Carr's next book!
*Some reviews from Goodreads worth adding:
Stacy Greene - When I started reading this book, I couldn't put it down! I was immediately caught up in the stream of the life of Rigel and her family. The book begins in Alaska and being someone who has always wanted to visit there, I was entranced by the descriptions and the place it held in Rigel's heart. I was swept along as Rigel was uprooted and traveled to Connecticut (for 365 days - until, as her father promised she could return to Alaska and they could be reunited) and the adjustment began. Having lived overseas as a child I found the adjustment to life in Connecticut to be reminiscent of the culture shock I experienced whenever I returned to the United States.
If I had to describe this book in three words, I would say caring, captivating, and funny. I cared about Rigel from the moment I met her and could identify with the multitude of feelings she was experiencing in her quest for understanding and belonging. The author of this book told a compelling story, so much so that I found myself so caught up in it that I kept reading because I wanted to see what would happen next. The author's writing style was smooth and easy to read. What endeared me even more to the book was the author's sense of humor. It takes a lot to make me laugh and at several points, I found 365 Days to Alaska to be laugh out loud funny. It wasn't necessarily something being said to make me laugh, but rather how the author put things. I am planning to reread this book at some point so I can savor the story.I am so impressed with this author and her debut book. I hope that she is writing as I type this review because I would love to read more books by Cathy Carr!
Faith Hough - Quick: read the publisher's description of this one.
If you know me, you’ll know that summary just tweaked a couple of sensitive points. As a former homeschooler and current homeschooling mom, my radar is always out for portrayals of homeschooling–and I’ve become less tolerant when they’re done poorly and fall into cliches and stereotypes. I’m also a Connecticut transplant who has found it possible to live at least somewhat off the land, even in a suburb of a big city. I confess that the main reason I wanted to read this book was to make sure it didn’t spread any untruths about homeschooling, Connecticut, or subsistence living. It’s not really the best attitude with which to approach a book.And then… I was blown away. Cathy Carr takes a fairly commonly-done theme and plot and makes it shine with perfect characterizations, believable struggles and emotional arcs, and just plain excellent writing. I absolutely loved this.Let me address a few of those sensitive points:I loved that, despite depicting a fairly sheltered life in Alaska, the author never blamed homeschooling itself for any lack of social grace or awareness. In fact, by contrasting shy Rigel with her outgoing sisters, Cathy Carr demonstrates that personality, more than educational-style, will effect a child’s social skills. A large part of the book also focuses on the failings of the school system in allowing for good social interactions–all the bullying and peer pressure that is so much a part of that environment. This was all balanced and true-to-life. I so appreciate that the hackneyed “homeschooled kid learns to thrive in school environment” theme was completely eschewed in favor of a theme that allowed for real personal growth.I could have gone for a slightly more nuanced view of Connecticut. We do have farms and nature sanctuaries and some good, old-fashioned small towns. We’re not Alaska. But we’re not all Fairfield County rich kids. Even Fairfield County rich kids aren’t all Fairfield County rich kids. That said, Cathy Carr again avoided the most harmful stereotypes, so I appreciated that. She also showed how beautifully diverse our state is. I know it’s impossible to show an entire culture in one story, and Rigel was exposed to only one small bit of CT.The off-the-grid lifestyle was shown to be difficult and impressive, rather than odd and unbalanced–even while showing its common pitfalls. Yes, an 11-year-old kid uses a gun to hunt. But it’s clear that this 11-year-old has been taught more gun safety than your average middle aged guy. She respects the gun as a dangerous tool and wouldn’t use it lightly. Her parents allow her to hunt because she is responsible and capable. This all could so easily have been twisted into disrespect for those who live such an extreme lifestyle–but it wasn’t.Finally, I have to add that 365 Days to Alaska is an excellent family story. Like another recent favorite, What Happens Next, it shows that sister relationships are worth fighting for.

A bittersweet story about coming of age -- self-awareness, finding friends who embrace you and your quirks, dealing with changes, surviving and thriving.