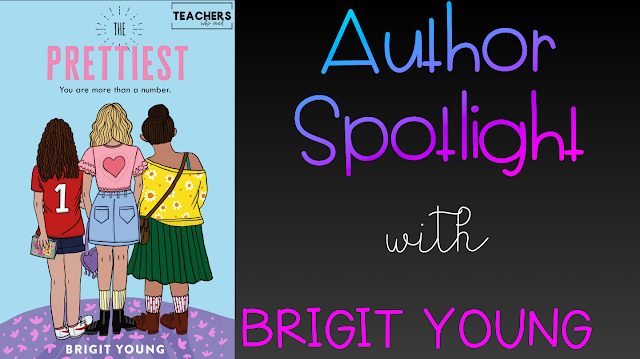 In The Prettiest, my forthcoming middle grade novel, the dedication reads: For my mom, Brady. Back when I was in middle school you told me I should write about it. You were right.

You see, by seventh grade, the topic of sexual harassment at my school had turned into a weekly - if not nightly - rant over family dinner.
The snapped bras. The endless lists, like “top ten best bodies” and “best chest.” The ratings from 1-10 on body, face, and personality. The absurd slur “slut” thrown around at girls who hadn’t even had their first kisses yet. The constant assessment of each and every body part. The grabbing.
I knew it was wrong, and I regaled my family with tales of this injustice.
I remember my father asking me what the adults were doing.
"Nothing," I reported, which is certainly how it seemed to me, though in retrospect there may have been action behind the scenes. I never saw it.
My mother said she was going to speak to the school. I begged her not to, perhaps feeling hopeless after speaking to the counselor on my own and being told - literally, if you can believe it - "boys will be boys." As angry as I was, and as shocked as I often felt at the sudden degradation constantly thrown my way by kids who had only recently been recess playmates, I still didn’t want to be the girl who made a fuss.
After I’d turned down each and every solution suggested to me by my parents, my mom often said, "I think you should write about it.” She’d always seen me as a writer, even when I shrugged the descriptor off.
I don't remember how I responded. In all likelihood, I firmly declared that my mom could never understand.
But, of course, she did. Maybe things had changed in some ways from when she was younger, like the advent of the Internet, or the explosion of eating disorders in prepubescent girls, or the often-violent vocabulary in the music popular among 11-year-old Michiganders. But my mom knew about being treated poorly because she was a female. She knew what it was like to have her working class parents offer to spend any extra money they came across only on her brothers’ education. She knew how it to be turned away from a business meeting because it was taking place on a “men only” floor. She knew what it felt like to have both peers and men in positions of power hit on her in an environment in which she should have been respected professionally or academically. And school is, in essence, a middle school kid's place of work. So yes, she understood.
Now, years later, with two young daughters of my own, I've finally taken my mom's advice: I’ve written about it.
My mother appreciated something then that it took me years of maturation to truly internalize: Even in the pages of a notebook, there is remarkable power in giving voice. And though I may be decades removed from the snapping and rating and grabbing in the hallways, the importance of giving voice to a past long gone still remains.
In The Prettiest, three very different girls navigate the fallout after a list of the fifty “prettiest” girls in their eighth grade class circulates around the school. All three of them undergo various manifestations of bullying regarding their physical appearances and perceived worth. Many of their experiences mirror mine directly. As I worked on the novel, I contacted several friends and asked them about their memories of harassment in their middle school years. I found that not only did many women have similar stories to me, but the trauma of that time continued to linger in their lives. As the #MeToo movement unfolded, many of the women I spoke to expressed to me that their long history with sexual diminishment and gender discrimination began in earnest at age eleven or twelve. They recalled how those years, when puberty often marks a girl’s body in a much more public way than a boy’s and can entirely determine how the world treats you, signaled a turning point in their sense of self that saddened them to this day.
I wish we’d all had a book that opened up that conversation between us then and not all the way into our thirties. Through the characters in The Prettiest, I was honored to be able to depict a bit of what occurred all those years ago amongst the bullies and bystanders and best friends of middle school, and I find comfort in the thought that somewhere out there a young girl may pick up my work and see her experience reflected in the pages before her. Hey, maybe she’ll even pick up a pen and write about it.

I hope she makes a fuss.