Flight of the Puffin Review 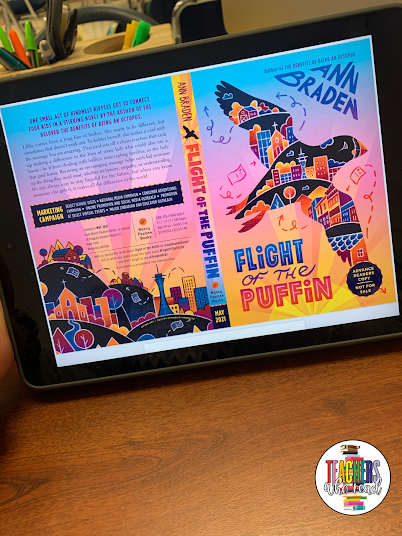 Synopsis:
One small act of kindness ripples out to connect four kids in this stirring novel by the author of the beloved The Benefits of Being an Octopus.Libby comes from a long line of bullies. She wants to be different, but sometimes that doesn’t work out. Now she's suspended again.On the opposite side of the country lives Vincent, a kid who loves the mathematician Katherine Johnson and being a non-conformist, who’s trying hard not to get stuffed into lockers at his new school. But that’s not working out too well either.  Nearby is T, who couldn’t take living at home anymore and is determined to survive on a rainy sidewalk.And then there’s Jack, a big-hearted kid so engaged in the fight to keep his small rural school open that he’s lost focus on the ones who need him most.Four kids. Four different lives. And then… one card with a message of hope takes flight and starts a chain reaction, helping each kid summon the thing they need, whether it’s bravery, empathy, or understanding. But best of all, it makes each one realize they matter -- and that they're not flying solo anymore.
Review:
Libby is navigating a life where her family has expectations that she is far from meeting. After quitting softball, no one in her family has really given her the attention and/or the affection she desires; especially when it comes to her love for the arts. Libby is invisible to her family for who she really is. As girls in Libby’s school are constantly judging her based off past actions, or her family’s actions, Libby decides to take matters into her own hands - with a stack of colorful post cards she leaves like one sentence reminders to those who might need it. “My parents might see themselves as strong and sturdy like concrete. Too bad I’m that dandelion sprouting through the cracks.”
Jack is from small town, country side, Vermont where he goes to a one room school house still. After losing his little brother Alex a year prior - there are a lot of things that are constantly reminding him of Alex even when he doesn’t necessarily want them to. Jack has taken on as a mentor to a young boy named Joey who reminds him a lot of his little brother. When a lady from the state of education comes in to try and take their school house away, Jack is willing to do whatever it takes to ensure their school doesn’t shut down.
Vincent is a boy in his own world, and he likes it there, until it gets very lonely. Vincent is constantly being bullied for how different he enjoys being, and doesn’t sway from staying true to himself, but sadly that started to come with consequences - staying strong all day only works until you absolutely can’t strong anymore. “Except that once you figure out who you are, can you really forget about that? And how long can you last trying to pretend you’re someone you’re not? But how long can anyone take being lonely?” THEN Vincent receives Libby’s postcard.
T is the part in verse in the story. T is such a mystery for quite some time. We are introduced to T in a variety of small poems where we can infer that T feels invisible. Later on realizing that T has left everything behind and is on their own. T is connected to Vincent by handing Vincent a shirt during a bullying incident. Then Vincent repays the act of kindness by bringing T and Peko food.
As the story continues and the postcards keep getting left around town, Libby talks with a lady at the store who brings in Vincent’s story of being bullied and almost as if he is bringing it upon himself. Libby has a hard time biting her lip in regards to this lady “defending the bullies” like - let’s just go with the flow of everything so you don’t get bullied. This ignites Libby’s fire even more to continue with the postcards, even asking the lady for the address to send one to Vincent in Seattle. T is connected to Vincent by handing Vincent a shirt during a bullying incident. Then Vincent repays the act of kindness by bringing T and Peko food. Vincent sees Jack on the news during the school board meeting and decides to return the act of kindness by sending him a postcard letting him know he is not alone.  4 separate kids all across the country experiencing life in different ways, yet so similar. Feeling all alone. Feeling like they’re invisible. Nobody seeing them for who they truly are, and appreciating that. Then started just random acts of kindness in hopes that someone, somewhere, will listen.
This is a story to be read aloud. To be discussed. To be truly digested by kids everywhere. In times where we are unsure of what to believe, sometimes who we are, what we are, what we stand for - this story reminds us to have hope and believe; and to understand you are never truly alone in your struggles.
“I always knew you were brave, but I’m so glad you’re this kind of brave.”
Out in May - Preorder now by clicking here: